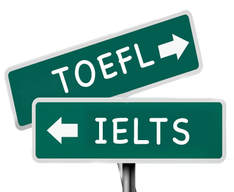 IELTS VS. TOEFL: WHICH SHOULD YOU TAKE?

If you aren’t an English native speaker, you’ll almost always be required to sit an English language proficiency test as part of your application to study abroad at an English-speaking university. The two most accepted English language tests worldwide are the International English Language Test System (IELTS) and Test of English as a Foreign Language (TOEFL) tests.

Whilst both accurately test your level of English and are widely accepted across over thousands of institutions worldwide, the two tests are different in their approach, structure and teaching criteria, so you should think carefully about which one you’ll choose to sit.

Read our guide to the differences between IELTS and TOEFL to help you decide which is best for you.

What is IELTS?
The IELTS is an English language test that is used for educational, immigration and occupational purposes, and is accepted by over 10,000 institutions across 140 countries worldwide. Jointly owned by the British Council, IDP: IELTS Australia, and Cambridge Assessment English, IELTS is an international language test, meaning that you can use either UK or US spelling. Depending on the entry requirements of your study programme, you might need to take either the Academic or General Training IELTS exam.

What is TOEFL?
The TOEFL test seeks to test your ability to communicate in English in specifically academic, university and classroom-based settings. It is accepted by over 8,500 institutions across 130 countries, including the UK, USA and Australia, as well as all of the world’s top 100 universities. TOEFL is administered by US-based organisation the Education Testing Service, and so is conducted in American English. This test is more likely to be favoured by American institutions.

General differences
Aside from the different styles of English each exam is are based on, TOEFL exam questions are almost entirely multiple choice, whereas IELTS requires you to respond to a range of different question types such as short answer, gap-filling and short essay tasks. The IELTS is significantly shorter than the TOEFL exam, taking approximately 2 hours and 40 minutes versus four hours to complete.

There is only one type of TOEFL exam that is done entirely on the computer, whereas there are two types of IELTS that are both completed on paper. Students applying for English-speaking tertiary programs will need to sit the Academic IELTS exam, whereas the General Training exam is used to meet immigration and some occupational requirements.

IELTS and TOEFL favour different modes of thought and problem solving. As TOEFL is primarily multiple choice, students will need to be able to think analytically to weigh up the differences between their options. IELTS requires more use of memory, and draws on broader comprehension skills as students are faced with different question styles.

Exam Structures
Speaking
Whilst both exams have a speaking component, the   IELTS speaking test  is taken face-to-face with an examiner. In the TOEFL exam, you’ll answer six questions into a microphone which are recorded and later sent to a group of six reviewers. Your IELTS speaking score will only be determined by a single examiner. The IELTS test will take between 11-14 minutes and may not necessarily be on the same day as the other exam components, whilst the TOEFL will take about 20 minutes and is always on the same day as the rest of the exam.

Where the IELTS exam features a range of different accents speaking in English, TOEFL only features American speakers.

Writing
The written component of the TOEFL exam is typed as opposed to the paper-based IELTS exam. TOEFL requires you to complete two tasks, the first of which will be a five-paragraph essay between 300-350 words. For the second task, you will need to take notes from a section of text and lecture excerpt on the same topic, and use them to construct a 150-225 word response. The   IELTS writing test    also has two sections, the first of which however requires you to summarise or explain information presented in a graph, chart, table or diagram. In the second, you’ll need to write a 200-250 word response to a prompt that offers a point of view, argument or asks you to write in a particular language style.

Reading
The reading tests for both exams are quite similar: the TOEFL reading test is made up of three-five reading sections you will have 20 minutes to complete, each drawn from academic content you’d be likely to encounter in a classroom. You will have to answer a series of multiple choice questions testing how well you’ve understood the texts.

The   IELTS reading test has three sections also each 20 minutes long and with texts academic in nature, but with a wider range of question types that could be anything from ‘fill in the gaps’ to short answer. Questions are also designed to test how well you’ve understood the text in its particular use of language, ideas and style.

Listening
Tests vary quite significantly in their listening components. The TOEFL listening test is between 40-60 minutes long, and involves you listening to excerpts from university lectures or conversations on a university campus. You will be required to take notes whilst listening and answer a series of multiple choice questions afterwards. In the IELTS listening test, students can answer questions whilst they are listening to the recordings, and will need to respond to a number of different question types and exercises of different lengths.
​
Scoring
The speaking and writing sections of the TOEFL are graded based on how they appear as a whole, including your range of vocabulary, writing style and grammar. Those of the IELTS are considered based on separate grades of individual criteria such as your use of logic, cohesion, grammar and fluency. For example, an essay with a logical progression of ideas but poor grammar will score higher in a TOEFL exam, whereas an essay with strong grammar and vocabulary that is weaker in expressing an idea will do better by the IELTS criteria.